Difference between revisions of "Touchscreen" 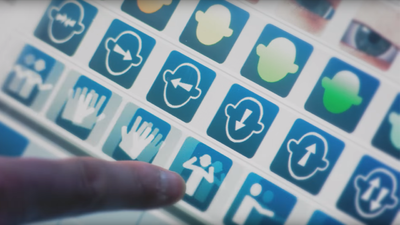 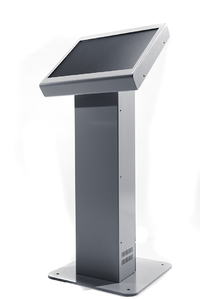 This simple intuitive interface allows for easy interaction with a robot, after start up it will appear automatically on the touch screen if supplied with your robot, or you can access a browser based version remotely see here.

The touch screen interface is designed for casual users and requires no training, it is commonly used by visitors in science centres and museums or for interaction at trade shows and conferences etc.

The touch screen interface is customised to suit the robot being used and will be different for RoboThespian and SociBot.

You can also fully customise all the features and content shown on the touch screen - see Content Creation.

The interface is divided into a public access area (screens and features available to your visitors / customers) and a password protected admin area (controls for volume, shut down, troubleshooting and other administrative features) 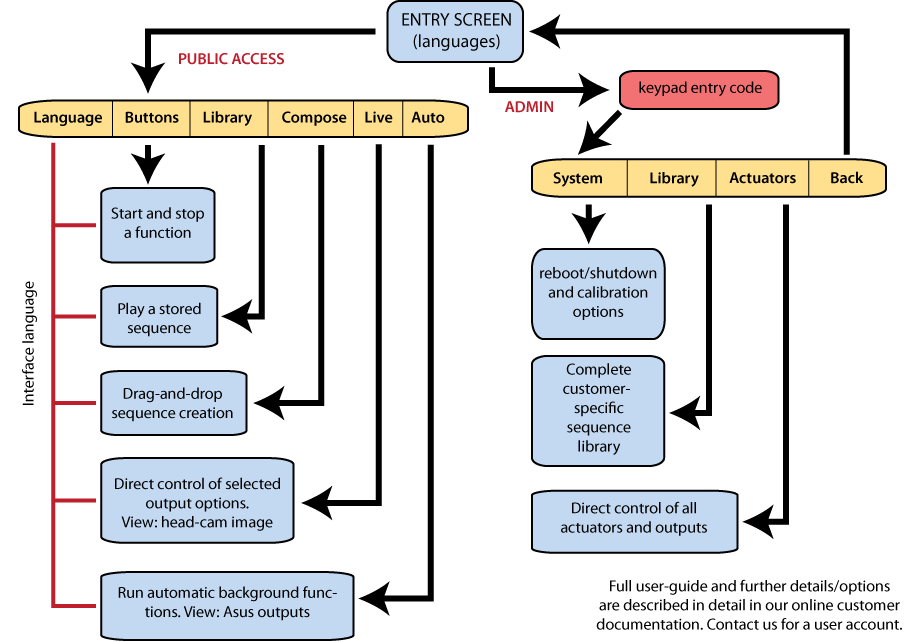 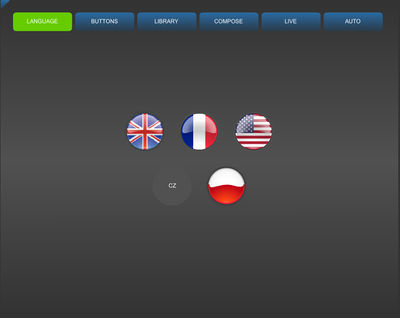 The language page is the landing page, the page the shows on robot start up, allowing you to select from the interface translations pre-installed on your robot.
Note that you may only have one language installed or enabled, in which case there will only be one button.

New Languages can be added as needed

If the flag icon is not yet available a two letter code will appear on a grey button as with CZ, (Czech Republic) in the image. Additional flags can be created if required.

Quickly direct your users to the most important/relevant content using large, colourful buttons.

These can be used to play sequences or start control functions. Buttons can trigger a story, or a song, start SHORE age-gender-mood estimation, or play user created sequences from the Compose screen.

A 'stop' button halts any of the behaviours or sequences on this page. 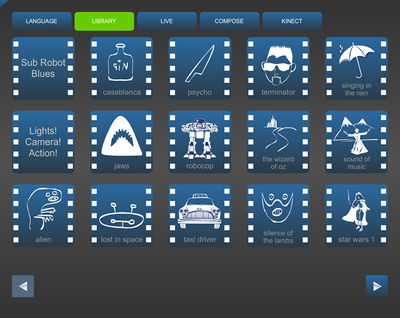 The library screen allows for easy triggering of sequences and animations that are stored on the robot.

Simply press a button to trigger the desired animation. The arrow keys at the bottom of the screen move through further pages of animations.

RoboThespian and SociBot come pre-installed with a range of content, composed of iconic film impressions and songs, related to robots and broader themes. You can get a recent list of content here - Standard Content

Custom content can be created by Engineered Arts, developed in conjunction with customers, to cover any subject desired.

You can also create and edit sequences yourself - see Content Creation for information on how to do this. 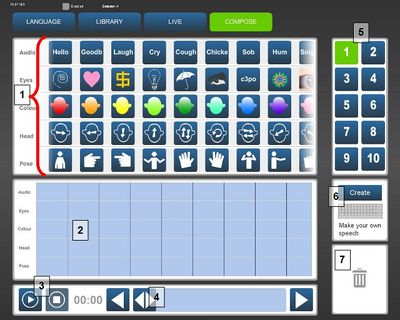 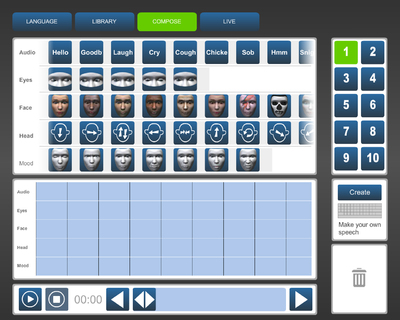 The compose screen is used to quickly and simply generate new sequences.

Eye graphics, cheek colours, head movements and poses can be overlayed onto speech and audio effects to create a complete sequence. Sequences are saved as you go along and remain accessible until deleted. 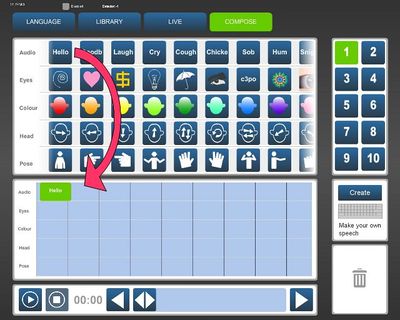 Existing audio and sound effects can be dragged with a finger to the time line in the bottom half of the screen or you can create your own speech using the text-to-speech engine.

To see more selections, click on a button and sweep your finger to scroll through the available options.

Adding your own speech 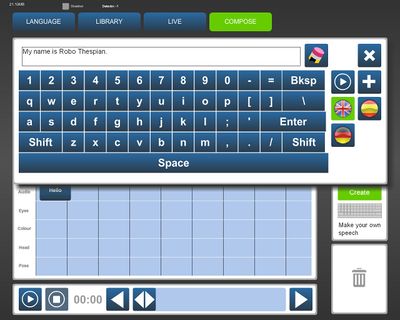 You can create your own speech by clicking on the Create button, this opens an onscreen keyboard and text editor.

The Text to Speech engine can be pre-configured with a range of voices. To change the voice and language in use, click on the appropriate flag.

Type the desired text, test it with the play button, then hit the add button to add to your sequence. Should you later wish to edit your text, drag the text onto the Create / Edit box on the right. 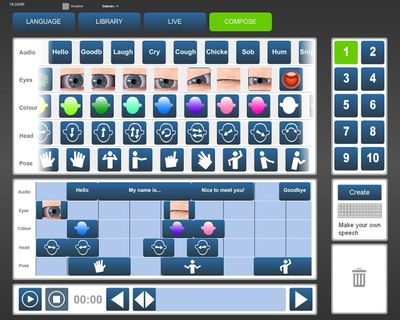 Eye graphics, cheek colours, head movements and poses can be overlayed onto the audio. Drag the desired selection onto the timeline to build your sequence.

These are visually effective compose moves.

Try and incorporate regular blinks, move the eyes around to look at your audience. 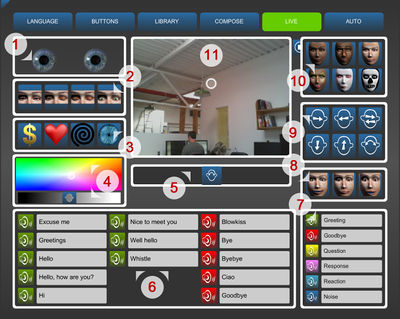 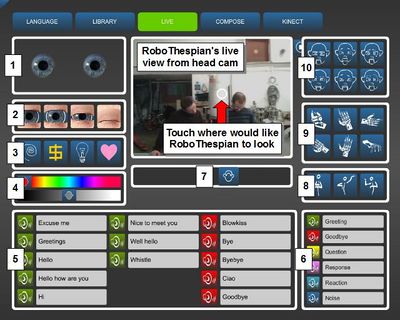 The live screen allows for live control of the robot. You can make the robot look in any direction, by touching the screen section showing the view from its head webcam. You can also get the robot to say different greetings, farewells, questions, responses, and even make noises; move the head in pre-defined sequences, or change facial expressions or eye positions. 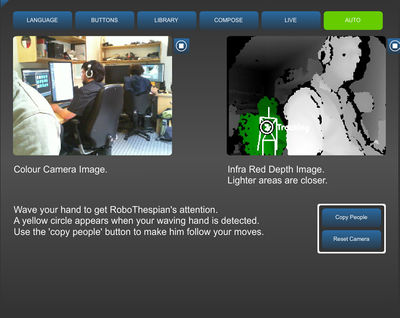 Auto (AKA Sensors) on SociBot

The auto screen (also known as Sensors) displays camera feeds from the chest-mounded RGB and depth sensor, and head camera with relevant overlays

At the top of the screen there are two views:

If you have administrative access to the robot, you can use the admin touch-screens to debug, control and even manage the content on the robot. The touchscreen CMS has been superseded by the browser-based CMS, however older SociBot models may still have this functionality.