The robot features an actuated neck and a rear fitted optical projector within the head shell allowing a variety of animated face images to be displayed in 3D form.

SociBot™ is supplied configured with standard content along with customer specific content installed, so it works the way you want it straight out of the box.

All software is included for customers to create new performances, upload additional faces and program the robot behaviours.

An inbuilt infra red depth sensor and head camera enable further interactive possibilities, from expression mimicking to age, gender and expression recognition, all designed to engage and fascinate the audience, further enhancing the communication potential of the programmed content.

SociBot™ Kiosk is supplied with an integrated touchscreen kiosk and is configured with a multiple language software interface suitable for public use.

SociBot™ Mini is a more compact robot with a truncated torso and no touchscreen. The on-board sensors and hardware are identical to the larger SociBot.

SociBot™ Mini is perfect for desktop operation, for example in a lab or office environment.

Both versions have extensible software and provide USB and network connection, to allow use of your own hardware and interface devices.

Typical Standard Package for public venues will include:

SociBot Kiosk and SociBot Mini are designed primarily to interact with people.

With this in mind, wherever possible, we have striven to make operating and working with the robot as intuitive and human-friendly as possible. 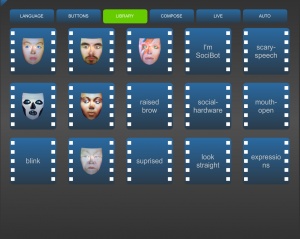 Kiosk Touchscreen Interface: Traditionally a public-facing touch-screen interface for designing sequences and interacting with the robot, this flash-based kiosk GUI is chikld-friendly and robust.

Drag-and-drop functionality lets you put together your own routines from pre-composed sequence elements. You can store and play routines, view camera outputs and create text-to-speech segments. This interface is most useful for robots intended to interact with an unpredictable public, eg. at a science museum, a reception or waiting room, or with young children.

An administrative area allows for greater control and content management, without requiring technical expertise. While this interface cannot make changes to the robot's control or hardware configurations, it is ideal for quickly uploading and playing content.
Suitable for: low-level users at public installations, fast administrative control and access

SociBot comes already loaded with a set of biomimetic background routines, a selection of pre-recorded sequences, and a host of subroutines to make interacting and using your SociBot simple and intuitive. 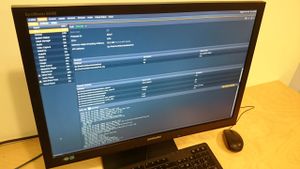 Entirely browser-based and stored on your personal Socibot, there is no need for software downloads or installations. Access camera and sensor inputs, manage sequences, images and sound assets, generate facial expressions, and create or modify behavioural control functions.

An in-browser Python editor allows you to write your own code for SociBot, sequences can be created or edited on the fly without needing to leave the robot environment, and the Socibot appearance and expression generation system InYaFace offers unparalleled control over the robot's visage.

This HTML5/WebGL Robot Management system is both simple and powerful, suitable for any kind of robot installation and users at all levels of experience.
Suitable for: all users, anywhere

A Projected Face allows SociBot to take on any persona at all.

A default human like face is parametrically driven in real time and can transition smoothly between facial expressions to show a whole range of moods.

The face image is not a pre recorded video, it is generated by blending together 3D models of faces in real time using a special graphical application called InYaFace developed by EA

Look At People - in standby mode, the robot will automatically track passers by and attempt to make eye contact by moving its head to follow the person.

If you want the robot to behave in a certain way, you can use Control Functions to achieve this. For example automatically say something when a person is standing in view or waves a hand.

Your robot can read QR Codes and respond in way you choose.

For example, a QR code printed on a visitor ticket or membership pass could prompt the robot to deliver a special message. The visitor simply holds up the QR code in front of the robot's face to prompt the response.

Your robot will attempt to estimate a person's age, gender and expression using SHORE object recognition.

It can be programmed to respond accordingly to the data received, ie. Simply relate its findings “hello you look like a 36 year old man, your face is happy”, prompt a piece of age or gender specific content, and so on. No personal data is collected or retained.

The user wears a wireless headset to listen and speak to the audience and control robot gestures and expressions on a pre-configured tablet PC.

You are able to select a person from a group that you want the robot to maintain eye contact with whilst speaking.

The audience hears user's actual voice projected from the robot. Voice can be modified in software for different effects.

Text-to-Speech converts text into sound and voices can be installed on your robot for use offline and in real time.

This allows content to be created on the robot directly, by yourself or for fun by your customers and visitors using the Compose screen of the kiosk

1 English Male voice is included for public use on Compose Screen - additional voices can be ordered if desired.

Note: Virtual Robot includes free access to a wide range of TTS voices for customers creating robot content online. The text is converted to sound files for transfer to the robot. Customers only need to pay for extra voices that they want made available on the Compose screen of the kiosk

SociBot™ is installed at a number of locations worldwide, including: