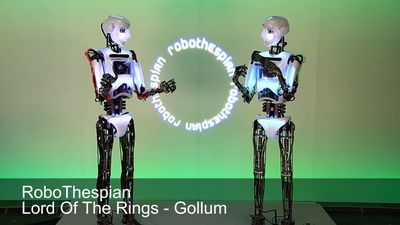 Animating a performance for two robots to perform side by side, requires some careful planning if they need to be synchronised with an audio track or each other.

Performances for two robots can be triggered on the fly using programmed buttons on the touch screen interface. Embedding an input in the timeline of a performance is also possible. This means robots can trigger sequences on each other, and complete performances can be designed using the 'add input' feature.

If two robots need to interact, work out which side or direction Robot #2 will be in relation to Robot #1. Once this is determined, animating and synchronising each robot in VR should be quite simple.

Add audio for both Robots.

This keeps animation for each Robot separate, and allows you to toggle the tracks on and off to check synchronisation of movements if required.

Once all the major movements are keyed and synchronised, duplicate this performance. Give the copy a sensible name (e.g. Welcome_Robot#2 , keeping the original file named as: Welcome_Robot#1)

Once you have my two files.

Now you should have two performance files with unique animation & audio, which is synchronised to the other robot. At this stage, continue working on each file, adding further animation detail, eye & lighting animation. Each sequence can then be deployed to each robot, and played as desired.

To play a sequence by triggering from within another sequence you will need to add an 'input' to the timeline you wish to trigger from.

The values in the Value string are: sequence name,offset,length,loops,player id

Keep in mind the player id may be different depending on how your Robothespian's are setup.

In the example above we have added an input on the first frame of Robot#1's performance. This will trigger Robot#2's performance.

The robots trigger content on each other via their IP addresses. Robot 1 needs to be configured with the IP address for robot 2 and vice-versa.

Each robot will be assigned an IP by your own network or router. Please let Engineered Arts know the IP addresses of both robots so that they can configure the robots.

Please set your router to assign the same IP addresses each time. If the IP addresses are changed the robots will not be able to trigger each other.